Here I am, cruising along through Camp NaNoWriMo – a novelling month where I’m writing 50,000 words before the end of July. No problem!

Well, maybe it will be more challenging than I thought.

The actual process of writing out that many words isn’t onerous. A couple hours a day is plenty to hit a suitable word target. But of course, the challenge is in coming up with something coherent, cogent, or heck, even just moderately… readable. And this year, I chose to create a sci-fi story based on time travel. 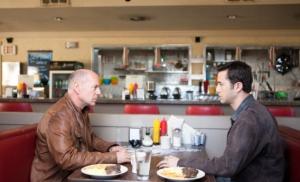 then we’re going to be here all day talking about it, making diagrams with straws.

As many of you will likely understand, particularly if you are familiar with time travel as a sci-fi genre, time travel brings with it a very large, understandably confusing set of rules. You can’t just have characters jumping around in time without dealing with some very important questions. What happens if they meet themselves? What happens if they change history? Or what if they go back and kill their grandfather, in which case they would never have existed in the first place, so how could they have gone back to begin with? If situations like this aren’t dealt with ahead of time, then these types of paradoxes will continue to crop up while writing.

Before even starting, I’ve had to create a large flow chart, as well as establish all of the rules (and it’s surprising how exhaustive the list has to be) that will be adhered to while creating the story’s universe.

In time travel fiction, there are generally two camps.  The first is that whatever happened in the past, has already happened, and is unchangeable. If you go back to kill your Grandfather, the gun will jam, or you will miss, or get run over by a car, or anything that the universe has to do to stop a paradox from occurring. Or second, that the past is fluid, but every action exists in infinite parallel universes. You kill your grandfather, but that happens in a new universe where your grandfather doesn’t exist, whereas you still exist in the original timeline. Aside from these two camps, there is a less used storytelling mechanic where history is fluid, and if you go back and stop your parents from meeting, then you will cease to exist (as in the movie Back to the Future) and literally disappear. This would be considered a causal loop, or the bootstrap paradox and for obvious reasons is not as widely used. (Bootstrap paradox is named after the Robert Heinlein story “By His Bootstraps”.)

Other issues with time travel from a story writing perspective are more subtle. For example, you have to build in a ‘cost’ to time travel, or else the characters will just keep jumping back and forth in time, willy nilly, changing and re-changing things in order to solve the problem. Think of the movie Terminator, for instance. It all started with a robot and a man going back in time, with no ability to go forward again. The whole movie created around one time-travelling event. Or the movie Primer, where the time traveller has to spend an amount of time inside the machine, equalling how far in time they want to go back. A high cost, indeed.

And as for volume of writing, the challenge is that it is incredibly hard to ‘make up the story as you go along’, and if you’re going to write 50,000 words in a month, you need to know where you’re going. Every action my antagonist or protagonist takes requires more research, more planning, and the toughest question, “How does this affect all of the other events in the story?” Add in a dozen or so supporting characters, and it becomes quite the epic mind bender.

Thankfully, Ernest Hemingway is attributed as saying, “The first draft of anything is shit.” For my month of novel writing, this will continue to be my mantra. It may not be perfect out of the gates, but it sure is turning out to be a lot of fun.

I’ve won it twice before. November 2009, and 2011. National Novel Writing Month takes place every November, and if you’ve …

A few weeks ago, I found myself once again browsing the shelves at Paper-Ya. It’s a fairly common occurrence that …

Hello. How have you been? It’s been a few months since you heard from me here, and I’m glad you’re …

Recently, I found myself in Federal Way, WA. Federal Way is a gem of a city on Puget sound that …

“You’re my favourite class of students!” I have said this in class before, on numerous occasions, to different groups. I …

Everyone’s talking about Google Glass. The upcoming ‘wearable’ tech that you put on your face, like glasses. It’s got a …

I finally had the opportunity to view “Linotype: the Film”. It may sound odd. A whole documentary feature about one …

One of the things that people ask me about type and design, is ‘how can I make my type look …